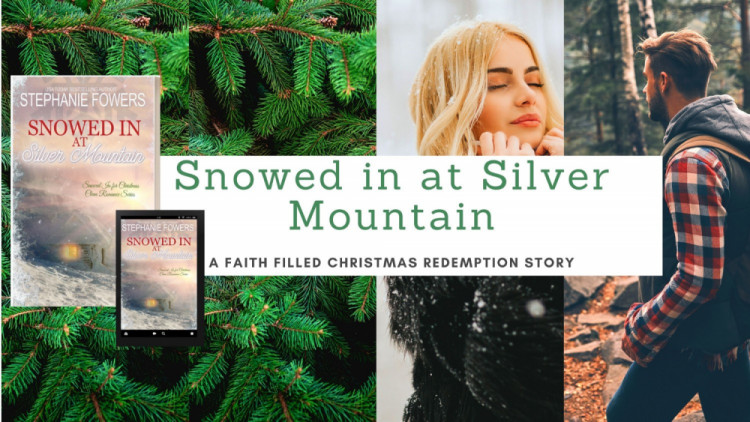 So excited to share my sweet Christmas Redemption story with you. Snowed in at Silver Mountain is finally available

Pax Fisher rummaged through his bag for his cell phone, carefully reaching around his gun all while Faith smiled sweetly at him. Her full red lips were distracting. Who was he kidding? Everything about her was distracting.

Flakes of snow glittered in her blonde hair under the florescent lights. If the place hadn’t borrowed so heavily from her cheery disposition, the cabin would remind him of one of those foul destinations he’d find in all those campy ’70s horrors. Her coat swished as she rummaged through the closet and pulled out bedding. “There are coats in here that might fit you too,” she said. “Some of the other rangers left their old ones behind.”

He nodded. Faith was quite the accommodating hostess. She kept a running dialogue on helpful tips and how things would be for him up here. His eyes kept sliding to her Bible.

What would he have done if Faith hadn’t followed him back into the cabin? He wasn’t sure how he would’ve convinced her to come with him without a fight, short of throwing her over his shoulder. Fortunately, she’d made things very easy when she mistook him for the Search and Rescue ranger who had come to replace her. He’d been lucky. For now. The real ranger would come eventually. Pax would have to work fast. He dug out his phone.

“No cell phone service,” she warned with a laugh.

“It’s amazing what a twenty minute drive will do.” She shrugged and began to peel off her coat. She was dressed in the usual ranger nondescript colors, but nothing could hide her feminine curves.

“You’ll get used to the peace and quiet after a while… either that or go crazy.” To demonstrate her point, she crossed her eyes. They were enormous, and strangely adorable in her playfulness. She smiled again and watched him with no suspicion, like she kept all her naivety packed in those swirling blue depths. She put away her coat in the closet and heaved up the heavy blankets to throw beside him. The pillows came next. “I’m sure you’re used to the quiet life by now.”

If she only knew. “Yeah, you get used to staring at the same four walls,” he said.

“Probably a lot like prison, so I’ve heard.” She cleared her throat uncomfortably.

Of course, she was thinking of her brother, not him. He studied her, not seeing many resemblances to Jody. The guy had nondescript brown hair, but Faith’s long hair was so blonde, it was almost white and she wore most of it in a messy ponytail. She was beautiful, but then again, Pax always knew that. But seeing her in real life? It was… surreal. She bit down on those impossibly lush lips, watching him with an interested, curious expression. He was glad that he didn’t have to tell her that he’d come for her necklace yet.

“You from Texas?” she asked.

He tried to focus enough to answer. “Dallas.”

“That would explain the accent. My bro—” she trailed off.

“What?” Though he knew exactly what she was hiding.

“My brother lives in Dallas,” she admitted.

Yeah, they’d been cellmates at the federal prison where they’d both been sent. Jody had told Pax all about the “family heirlooms.” His cellmate had stolen the jewels before he killed that guy. In fact, the creep who’d tried to mess up Jody’s sister wasn’t after drugs. He was going for the jewels. And this girl had no idea. Faith played with the chain of her necklace, not knowing she wore millions of dollars around her neck.

“Where are you heading after this?” Pax asked her.

“Well… I’m taking a research job for the winter. I might be there longer than I like though because”—she sat against the arm of the couch, looking suddenly despondent—“I’ve been searching for rare animals to prove that the rangers are making a difference at the park, but… I wasn’t successful, so I might not get my contract renewed, which is really depressing.” Her eyes dropped to the floor.

He was intrigued by the passion that she always seemed to have. She was fairly dripping in it. Seeing her in person was no different. He couldn’t help prying. “You really like it here?”

She nodded vigorously. “I love it.” He didn’t doubt it—the natural beauty of this place was where she belonged—he might not fit here, but she did. He couldn’t tell her that. “Other jobs might pay better, but I feel like this place is a part of me,” she said. “It’s hard to explain, but it’s so different from where I grew up, and I can barely bring myself to leave.” She shrugged off her gloominess. “If you see a white bird with a scarlet stripe across its head while you’re up here, take a picture of it. You’ll save a lot of our jobs, including mine.”

“I’ll do what I can.” Silence stretched between them.